I was first elected by my Senate colleagues to the role of Chief Government Whip in the Senate in January 2019 and finished in July 2022.

During those three years, I had been a trusted and dependable member of the five-member Coalition Senate Leadership Team, first under the leadership of Mathias Cormann and then Simon Birmingham.

The work I do with the Coalition Senate Leadership Team ensures the effective, timely passage of the Government’s legislative agenda – in almost two years I have guided the Coalition Government in the Senate through 6178 divisions over almost 720 hours and 74 sitting days, ensuring 223 Government bills were passed.

The role of Chief Government Whip had taken on a new importance during COVID-19, when it was central to continuing the smooth operation of our parliamentary democracy and needed most. 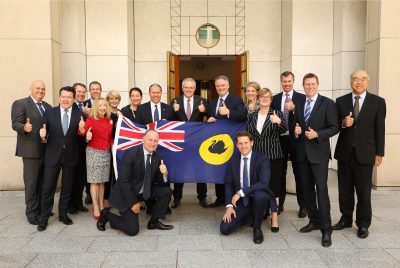 “In his role as Chief Government Whip, Dean is highly regarded for his discretion, work ethic and commitment to building a strong Coalition Senate team.

Dean brings highly valued insight and strategy to the discussions of our Senate Leadership Team, helping us to effectively manage both opportunities and risks in day to day Senate management.

His professionalism during the last two years in the role, working across the Senate with non-Government Senators, has been an integral part of the legislative success enjoyed by the Morrison Government.”

Senator Simon Birmingham, Leader of the Government in the Senate.

Stepping-up on the big issues

In addition to supporting the broader achievements of the Coalition over the last seven years, my record in advancing WA’s interests and our values includes:

“I would like to extend thanks to you from the WA wine industry for your support in 2016. The outcomes regarding the wine equalisation tax will have a generational positive impact on south west WA and other fine wine regions around Australia. The significance of this from our industry cannot be overestimated.”

“Thanks to my Coalition colleagues, thanks to the support of the Prime Minister and can I particularly single out… Senator Dean Smith from my party, who have been great stewards of this endeavour with me and my crossbench colleagues.”

“The Prime Minister on 3AW this morning said that the government would consider a proposal put forward by West Australian Liberal Senator Dean Smith for a parliamentary inquiry by the human rights committee.

This would help break the deadlock in parliament over section 18C and provide people with an opportunity to outline the consequences of limiting freedom of speech.”

Simon Brehemy, Director of Policy at the IPA, October 2016.

A values-based approach to COVID-19 recovery

Having been on track to deliver the Budget back to surplus for the first time in 11 years, the Coalition is now entrusted with responsibility of steering Australia through the COVID-19 recovery and rebuilding its economic future.

While many challenges remain, we are now presented with possibilities that couldn’t have been imagined pre-COVID-19 – put simply, we have a compelling opportunity to reshape Australia’s future – for our generation, and those that follow.

In doing so, we must strongly assert those values we hold true, to protect Australia’s freedoms and liberties, and secure its future prosperity.

The Coalition’s emphasis on job is critical – employment provides opportunity, independence and self-worth, as well as the economic security for Australians to succeed.

To further drive jobs growth, we must reduce the cost of doing business and boost Australia’s competitiveness with policies that: